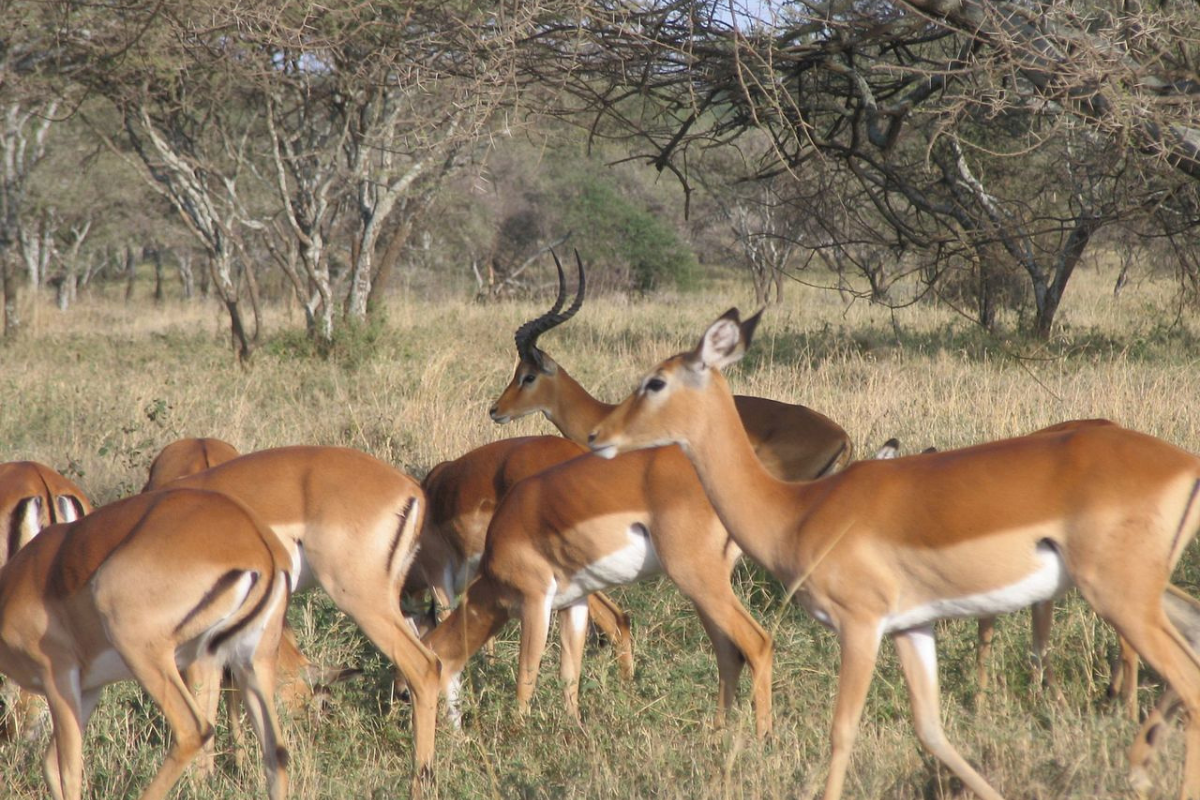 The immensely spectacular Serengeti National Park was established nearly a hundred years ago as a large colonial reserve, which was then made into a national park in the year 1951, and later endorsed as a UNESCO World Heritage site in the year 1979. One of the last remaining sites of the beautiful untouched wilderness on Planet Earth and Africa, it lies securely in the Serengeti Ecosystem, an area that stretches from the vast woodlands, Stillwater lakes and grassy plains of Ndutu in Southern Serengeti, to the Northern verdant river expanse till the Masai Mara National Reserve in Kenya. This immensely large ecosystem covers an expanse of over 25,000 square kilometers, within which the Serengeti National Park itself consists of over 15,000 square kilometers in area, of protected African treasures, to be discovered on a dream Safari vacation to Tanzania. Any ecosystem is composed of interlinked and interdependent phenomena, including the topography, climate and situation, the wildlife and the effects of human usage. The climate of the Serengeti is defined by periods of rain and drought. The geography of the area ranges from apparently limitless grass plains in the south, fertilized by volcanic ash rich in life-giving phosphates, to wooded highlands in the east, crossed by rivers and studded with island outcrops or kopjes of eroded granite, home to hundreds of vulnerable inhabitants such as the rare black rhinoceros. 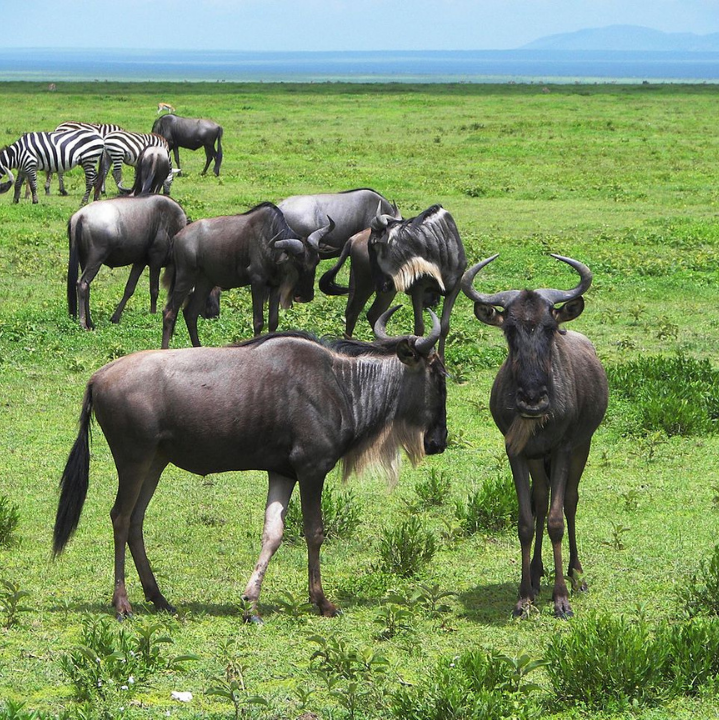 Across these magnificently large plains, range a fantastic cast of wild fauna, including impressively huge numbers of herbivores, predators and avifauna.  Amongst them, the principal actors are blue wildebeest or gnu (also known as the white-bearded wildebeest), determining the nature of the ecosystem by their spectacular annual Great Migration, “The Greatest Show Of The Natural World”, during which they trek in circumambulation, in their millions, three thousand two hundred kilometers from northern Tanzania to south-western Kenya and back again, as the plains dry out seasonally, forcing them to seek fresh pastures. In turn, their odyssey affects other creatures. Lions, jackals, hyenas, leopards and cheetahs prey on the migrating and resident herds. Vultures subsist on the predators’ leavings. The herds leave tons of dung which enriches the grasslands, providing food and nurseries for many varieties of dung beetles. Serengeti National Park is a wonderland in which to experience the interwoven miracles of life and death on a wondrous East African safari adventure. 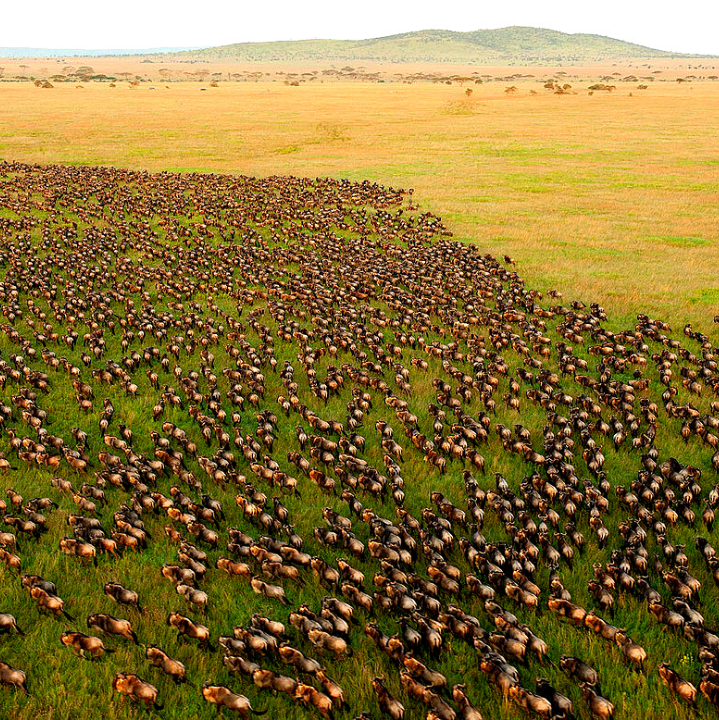 Experiencing the great migration of Wildebeests – A Paradise Sight Worth Witnessing

There is still a place on this planet Earth where life is still the same as it was in the beginning, a place where life still scintillates and marvels you. To the Maasai tribe who are the pastoral people of the Ngorongoro and the Serengeti, this is the place where the land runs on forever, a land suspended in the warping loop of time, suspended endlessly and the last refuge for the largest concentration of wildlife left on Planet Earth. Serengeti National Park hosts an endless array of grassy plains, woodlands and hills dotted with glorious animals of all shapes, colours and sizes on every side. Long ago, before the age of man, there were mountains to the east of this natural wildlife refuge that spurted their fury, laying a long and thick blanket of volcanic ash. Entire mountain ranges were buried, leaving only the mountain summits as lone markers of an ancient world, long lost. Over the course of four million years, ash turned to rich soil yielding vast grasslands, and today cradling some of the most important animal species on earth. Yet of this richly diverse habitat, one species stands out from all others, as it is the foundation of the wildlife ecosystem in the Serengeti. With herds reaching over one million, it is the wildebeest that affects many other species. Often called the Serengeti Clown, the wildebeests are magnificently endowed, ready for their endless search of rich grasslands and freshwater. Alongside this massive population of wildebeest, co-exist other herbivores, equally drawn by the rich and varied vegetation of the Serengeti. The Serengeti, ruled by simplest of life’s principles, where herbivores eat plants, and carnivores eat herbivores, thus resulting in the magnificently rich animal life diversification; a paradise, where lions and cheetah hunt with might and stealth, a great generosity offered by the enormous wildebeest herds, where nothing is left to waste here on the Serengeti plains. 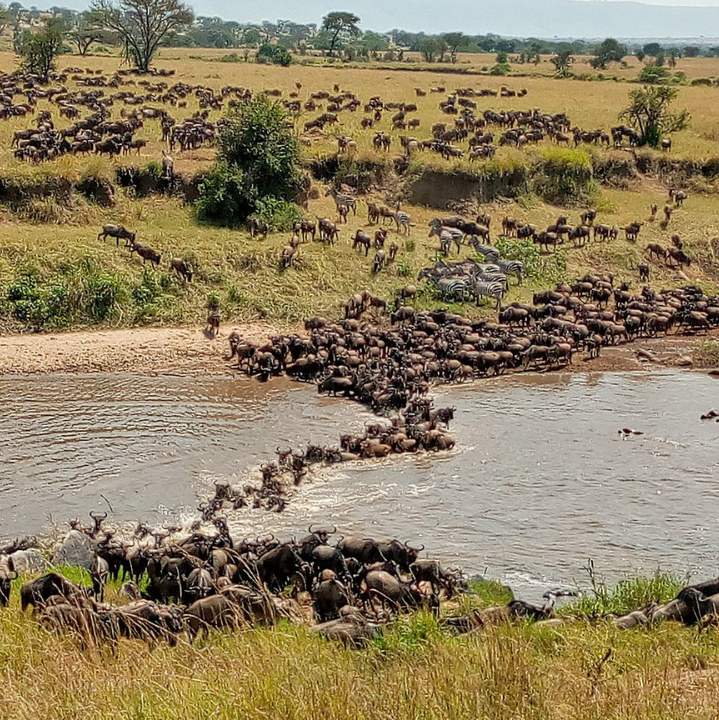 In the very short, rainy season, the Wildebeest herds grow stronger and stronger on the shorter grassier plains of the Southern Serengeti, including the Kusini, Ndutu, Masek and the Maswa wilderness. But soon as the lack of water and pasture deepens around the end of April, it demands movement, a huge defining moment for the Wildebeest herds, whether to choose between migration or starvation. For nearly one a half million of these incredible animals, this becomes a race against death, against crippling hunger and thirst. The herds are accompanied by zebras and gazelles and drive towards the incredible  Grumeti River west and Mara River north via central Seronera bypass, drawn toward Mother Nature’s promise of water and grass. This epic yearly journey takes place between the two African countries of Tanzania and Kenya. The wildebeest herds migrate north towards the famed Masai Mara Reserve in southwestern Kenya, where they roam for three to four months (July, August, September to parts of October) until the rains resume and then migrate back to eastern Lobo Serengeti, becoming a deadly gauntlet of predator versus herbivore that lasts more than eight hundred kilometers or five hundred miles. 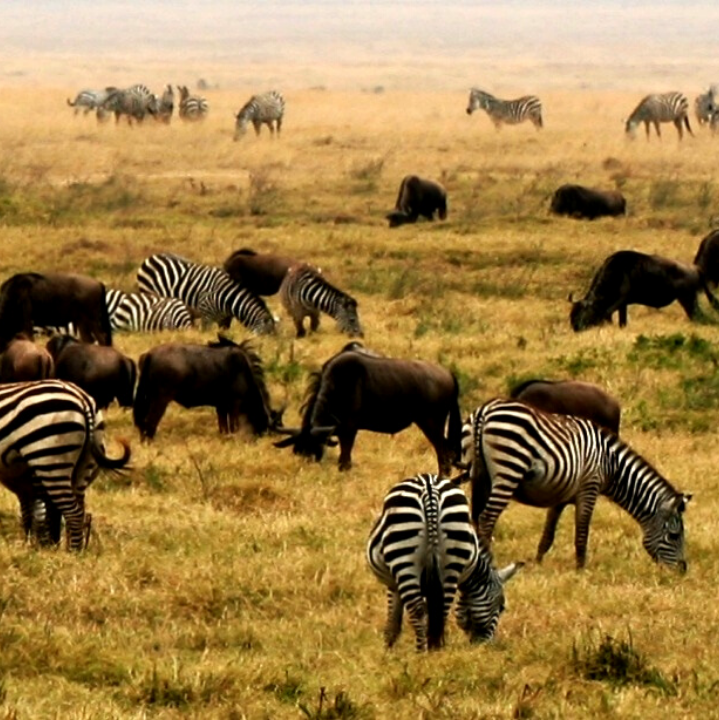 To the Southeastern part of the Serengeti National Park, lies the Ngorongoro crater, which is a large volcanic caldera encompassing nearly hundred square miles of the most fertile and agriculturally rich land. Entombed in an Eden lie rich forests and foraging vegetation, an abundant feast for resident animal species. Hippopotamus, rhinos and thousands of other animals make their home here, others only migrate for the season, for example, pink flamingos. But, like other ecosystems, dangers lurk here too. The Ngorongoro Crater offers refuge to endangered species like the black rhino, who endures this limited paradise, as it offers protection against poachers who hunt the rhino for its precious horn, while at the same time offering a banquet of options for the ever prideful lion. Serengeti ecology is also known as the ‘Cradle Of Mankind’. It was here in the southeastern plains near Ngorongoro lies Olduvai Gorge and Laetoli, wherein lies a human fossil record that dates back to almost around three million and seven hundred thousand years. Today, it is the proud Maasai people that dwell here, following the pastoralist lifestyle of their chaperoned wildlife friends, the wildebeest.

Where to stay in Serengeti –

Accommodations in Serengeti come in two main types, lodges and varied tented camps, and in 3 Safari Tiers from super luxurious, deluxe mid-range to value cost-conscious. Premier tented camps in Serengeti top the Safari Tier 1 accommodation like Sayari Camp in the north, Sabora Tented Camp by Singita in the west, Migration Camp in the east, Kusini Camp in the south and more. All range with opulent private living space, beautifully furnished and immaculately presented with every yesteryear amenity laid on, often including butler service, massage, king-sized beds, Victorian bathtubs, sumptuous cuisine and highly skilled experienced guides. What makes them such memorable luxury gems for guests is their unobtrusive integration into wilderness. Small, exclusive, intimate, boutique and isolated, they are ecologically responsible and guest-centred to ensure the most rewarding, ultra-comfortable and richly satisfying nature vacations in Africa. These are epitome destination lodgings for unparalleled game viewing and photography. The deluxe Safari Tier 2 canvas accommodations in Serengeti like Buffalo Luxury Camp in the east, Lake Masek Tented Camp in the south have more rooms with more guests in camp, offering slightly less flexibility of organized activities than the premier accommodations but still aspire to the very good standards of service and attention to detail. Value tented camps like Kati Kati Camp in central Serengeti have several campgrounds but are away from each other. These modest camps are set at Safari Tier 3 specifically for budget-conscious guests geared towards economies of scale with no-frill services and standards. They bargain fair value with the least personalization and rigid timetables to accommodate higher numbers of guests in their varied campsites but still reflect the concept of Edwardian safari comfort but bearing no resemblance to rough back-packing. 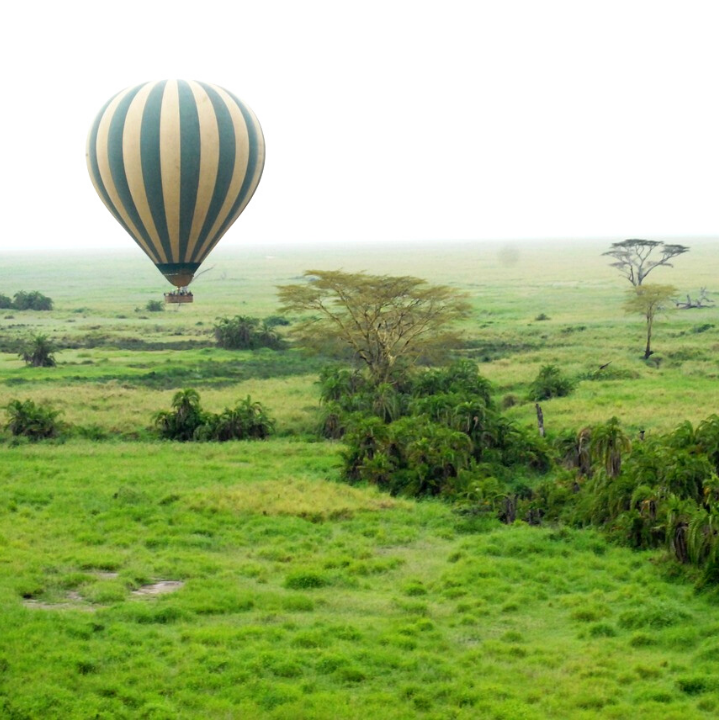 A Serengeti balloon safari is a fantastic once in a lifetime experience, particularly suitable for a bird’s eye-view game viewing experience on your wildlife tour in northern Tanzania. Hot air balloon rides leave from three sites in this prime national park. In Central Serengeti, wildlife gathers year-round in the Seronera River Valley where there is permanent water. The Great Migration passes through around May and June. The Western Serengeti includes the Grumeti River, scene of theatrical crossings during the Great Migration in June and July, when hundreds of thousands of gnu, brave the giant Nile crocodiles, and many perish while others detour to avoid the perilous river. In South Serengeti plains, the wildebeests assemble from December onwards, to calve in February, producing 8000 newborn every day on a three-week marathon, a sight not to be missed on your personalized nature travel in Serengeti. The plains of the Serengeti are particularly suited to balloon flights which are particularly convenient, letting you get aerially closer and distinctly accessible to the action than you could be by a game-viewing safari vehicle.

Conditions are favorable early every morning, but you are advised to pre-book this popular activity for your safari holiday to East Africa due to its limited seating availability. Unfortunately, only children over seven and active adults can be accommodated. Because weight is a crucial safety consideration, passengers weighing over one hundred and twenty kilos may need to reserve two places. The balloons are immense. Baskets are compartmented for comfort and security, accommodating sixteen people for each one-hour voyage. The price reflects the enormous cost of the balloons due to a safety replacement every few hundred hours, equivalent to swapping with a high-end automobile. High fees are payable to the national park for tourist concessions for every single passenger. A skilled, experienced and licensed pilot and staff of twenty people are needed for each trip, including launching and recovery as well as transport to and from the launch and celebratory champagne breakfast. Each flight is unique, some high enough to view the panoramic landscape for miles ahead, others low enough to see individual animals at close quarters. It is not a cheap excursion, but it will make your northern Tanzania vacation one of the most memorable of your whole life. It is possible to charter special private balloon flights in the Grumeti Reserve for honeymoon couples on their romantic trip in the great plains of Africa.